The Story of Mizkit’s Downtime

The slightly longer version is that due to Reasons, I believed that mizkit.com was registered through one domain registrar when she was in fact registered through another. When her time was up, I paid the bill at Registar One, only to find out too late that I should’ve been paying it at Registrar Two. By that time, Registrar One, who are a bunch of f*ckers (do not, for the love of god, use Jumpline) had set up mizkit.com as an ad farm run by one of their partners–a partner which they repeatedly informed me they couldn’t affect anything with.

Anyway, the site name went to auction, my friends Fred and Laura *completely saved my ass* on it, because I was paralyzed with grief and rage over the whole thing, and after three full months of nonsense I (re: Laura) was able to get mizkit back up on a different server which is now her forever home.

I’d had thoughts of relaunching with a new design, but upon her resurrection, I discovered that the reason I haven’t redesigned mizkit.com in three years is not just exhaustion or laziness, but that I really, really love the design elements here. So I canned the design I had in the wings and am trying to do something else with the same Chance image. There are modern web design functions I really want to incorporate, so there *will* be a redesign coming soon, but for the moment I’m just going to be incredibly, incredibly grateful I’ve got my web home back. I’ve been mizkit online for 20 years. I was *destroyed* when I thought I’d lost her, and I’m so, so glad to have her back.

Wee clickable mockup of the possible redesign behind the break. 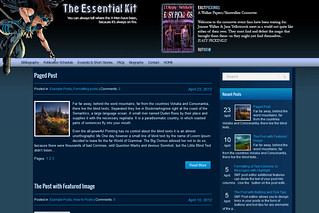