After what was admittedly the smoothest, fastest possible series of flights from Alaska to Dublin–a mere 13 hours in the air, with 1-hour layovers in Minneapolis and JFK, so we basically were getting off one plane and on another–we are home, and completely wrecked. Even the fastest possible flight times is a lot of hours, and we had to get up at 3am to start. Which would have been awful enough, but poor Young Indiana got excited the night before when he saw the suitcases, and although he went to bed at 8:30 as usual, he didn’t go to sleep until after eleven. And, of course, it was 17 hours or so of airports and 24 or so of elapsed time, so yes, obliterated. Here’s Young Indiana as we were landing in Dublin: 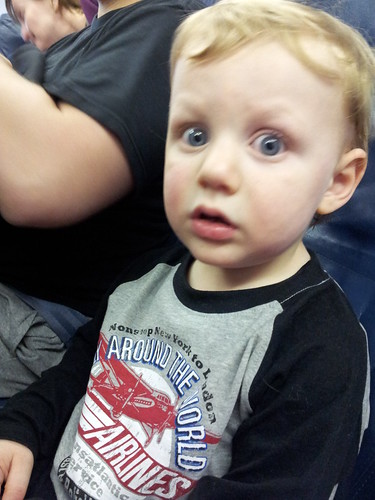 We all still sort of look like that. Especially after–unsurprisingly–it was Time To Get Up! at 2:30 this morning. Ooghlhg.

Sometime this week I would like to remember to do this letter to my young author self meme that Harry’s picked up on, and the fantasy mistressworks meme that Nicholas has posted.

After I catch up on sleep. And perhaps on work. And housecleaning. And doing something about the P-Con site. And oh god, we’ve got a concert this week. I anticipate mental obliteration continuing through the weekend.

I’m going to go read a book instead of doing any of those things.