Not that the objects of the subject line have anythign to do with one another, you understand, they’re just both on my mind. The first because I’m listening to Jim Steinman music, and it always makes me want to write a rock & roll fantasy, and then I’m depressed because I can’t imagine actually writing something that does to me what the over-the-top Steinman music does.

Picoreviews: I have been to BATTLESHIP and THE COLD LIGHT OF DAY this weekend.

Picoreview: THE COLD LIGHT OF DAY: I spent the entire movie slightly distracted by Henry Cavill looking so much like Tom Welling that all his expressions were very familiar but his body language was wrong. It was an okay movie. Sigourney Weaver was entertaining, Cavill was pretty, and Bruce Willis was looking extremely slim and fit and I hate him for it. If only I had a job which required me to be in peak physical condition, like my sister, who is now so fit she has to be tethered to the earth (photo by Andrew Flood): 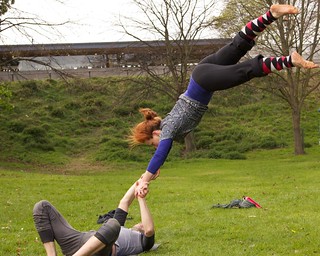 Picoreview: BATTLESHIP : Far, far better than it had any right to be. It is completely impossible that they could take Battleship, the game, and turn it into a movie premise that not only worked but made sense, much less that they could then put a surprisingly moving and well-developed story without any superfluous characters or embarrassing romantic subplots (the romantic subplot is not embarrassing, and the other one they could have forced in is non-existent, which is REALLY NICE). And while it’s utterly true I’m a complete sucker anymore, there was a scene I cried all the way through, which given that it’s a Hasbro movie based on a board game, is kind of impressive. Really, seriously, a far better movie than expected. Well done them.

And to end on a completely different note, a silly book idea has got me re-reading PRIDE & PREJUDICE, which I haven’t read since high school. I vividly recall thinking, when I read it then, “This really is a funny, clever book,” and three chapters in I’m certainly still of that opinion. What an utterly charming book it is.