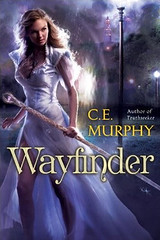 Once a tailor in Boston, Lara Jansen has crossed from Earth to the Barrow-lands, a Faerie world embroiled in a bloody civil war. Armed with an enchanted and malevolent staff which seeks to bend her to its dark will, and thrust into a deadly realm where it’s hard to distinguish friend from foe, Lara is sure of one thing: her love for Dafydd ap Caerwyn, the Faerie prince who brought her to the Barrow-lands. But Dafydd is missing and his home is closer than ever to a final conflagration. Lara has no other choice: she must harness the staff’s magic and her own truthseeking talents, blazing a path to a long-forgotten truth that will save the Barrow-lands…or destroy them forever.

Read the first chapter, then run out and buy your own copy!

I’m pretty excited about this one. As I said before, this is my 16th published full-length novel in just over 6 years (plus a wide variety, at this point, of novellas, short stories and comic books o.O), and it’s the brief reprieve of having everything I’ve completed a contract for actually being on the shelves at once. It’s also kind of the breaking point of “Catie is backing off now” (though I realize with the various crowdfunding projects it doesn’t really look like that), and thus is a significant psychological book release for me too.

Also, of course, I think it’s a rather charming story, and picks up about fifteen seconds after TRUTHSEEKER leaves off, so at long last you’ll get to find out what happens in this particular fairy tale. :)

(x-posted from The Essential Kit)