I had a terrific time at the Bon Jovi concert. I’d gotten the “VIP Diamond Circle” package, because it cost the same as what I paid a scalper five years ago to go to a different concert, so I figured what the hell. It included a bit of swag–an actually quite decent bag, a program, a couple other things–and had a pre-show buffet and drinks and stuff. The buffet looked good but I wasn’t hungry enough to partake, so eventually I paid an egregious amount for a hot dog instead. :)

The opening bands were good, and then Bon Jovi came out on time and played for three hours, which was pretty awesome. And, er, this morning Jon’s in surgery after having blown out his knee in Helsinki, apparently. But the show must go on. :) I ended up chatting quite a bit with a fan club member from Dublin, Canada, who had come over with a fan tour or something. She was very nice and had a lot of good Bon Jovi stories, since she’s been to over a hundred concerts. o.O And here I thought 3 was pretty good… :) Anyway, the sun came out for the whole concert, because God is a Bon Jovi fan, and I had a good time. :) 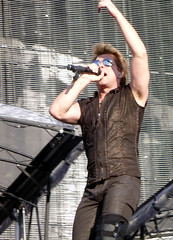 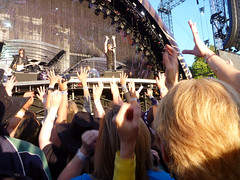 I let this woman, who was quite a bit shorter than me, move in front of me (which really irritated the other even shorter woman behind me, but we hadn’t been bonding through headbanging, so ptlblht). We became good friends instantly. :) 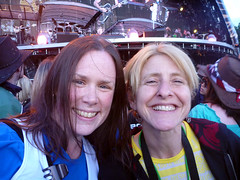 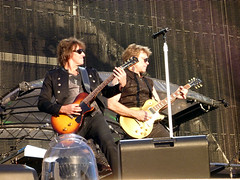 I have a couple videos, too (including one of Dubliners singing for their encore, which is one of the things I just bloody *love* about this country), but I’m not smart enough to get them off the camera, apparently, so I think I’ll just post this now and try to deal with them later.

Oh. *laugh* On the bus on the way home, the two girls behind me were amusing themselves by texting a boy friend of theirs to say that Jon had invited one of the girls onstage to sing “Always” with him, and that she’d done *brilliantly*. The poor fella texted back with “Seriously?!?!” so they were trying to think of what more to tell him, to see how far they could take the piss. So I turned around and said, “Tell him at the end of the song, Jon kissed her,” and they nearly died of delight. *laughs* Sadly, they got off the bus before I found out whether their friend bought it. :)