One of my–well, I think technically they’re second cousins, but I tend to go generational for relationships, so: one of my nephews (of which I technically have two but by generational breaks I have, uh. Six. Ten. Thirteen. Fifteen. And four nieces. One one side of the family. I think there’s another two of each on the other side, but I’m not positive. Anyway!) One of my nephews wrote me a terribly cute letter (which he asked his mother to post on FB, trusting it to get to me that way, but not trusting it to get to me via snailmail *laughs*). It says:

“Dear Catie (Aunt Catie),
We are having a new baby, so I can’t visit you for a while. Sometime, when the new baby is 3, I want to come play with you in Ireland and I want to play baseball. ”

and has a picture he drew of me: 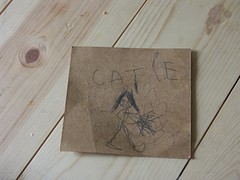 Now I want to write more Gryphon Beach stories for little boys. :) The weird thing about those stories is the first several I told off the cuff in a chat room a Very Long Time Ago and they were easy as anything to write. It’s much, *much* harder to write them straight, like regular stories. Apparently they’re meant to be composed like one would tell a story at bedtime, not sitting down to Write Like A Grownup.

Obviously I need to log back into Too and tell people some stories.

(eta: ooh, or maybe hold a chatroom storytelling hour a few times, for people to log in to and be told GB stories!)