This should be a post with pictures but I’m afraid if I try to get the pictures ready I’ll never get the post made, so I’ll skip the pictures. Except for the photos I’ve already got uploaded. :) (and, um, the ones I seem to be uploading as fast as I can to go along with the post…)

Anyway, the Trad Music Festival in Temple Bar has been going on this past week, and on Saturday the wee fambly went out to take in some culture. We discovered while doing so that they’re remodeling the market square where the Saturday food market is, so we had to go exploring to find the sushi hut and the pork place. Find them we did, and the Sushi Hut lady told me they’d be down there on Cow’s Lane for three months! That’s a long time!

Also, there were goats: 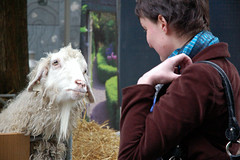 We spent a couple of hours listening to trad bands, none of which I got good pictures of. I did, however, get some grand pictures of the lads next to us dancing: 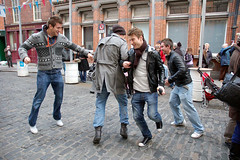 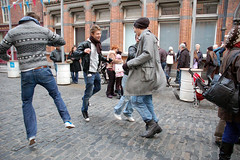 For which Young Indiana had the best seat in the house: 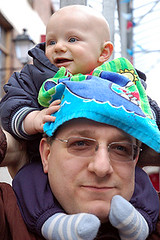 We met up with and hung out with Mom and Dad for a while and listened to more music, after which we went home and caught up on some TV. Very, very nice day. And then on Sunday we brought Young Indiana to Mom and left him there for hours, muahahah. Our big plan probably should have been to go back home and sleep for several hours, but we were brave and went out on a date instead. The idea of going to a movie was somewhat thwarted by nothing we particularly wanted to see being on at the most convenient time, so we wandered across the city centre to the Gotham Cafe, which, we had been told (by Americans) has the best pizza in Dublin. (It was pretty good. Possibly the best in Dublin, in fact. But I thought it needed more marinara sauce, which is not something you’ll often year me say.) Anyway, we detoured to The Harlequin, a vintage shop, on the way to the restaurant, and Ted was forced, FORCED I TELL YOU, to buy an excellent navy blue peacot and two hats. 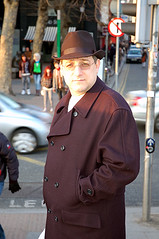 The other hat is a pork pie and equally awesome. And we stopped by Sub City, which we can’t usually do because the buggy won’t fit in there, and then we went home and collapsed. :) It was a very, very nice weekend!