Lovely Christmas here, with all the whiteness and beauty. I know it’s a terrible inconvenience (and indeed, my lack of getting out of the house because it’s too hard with the buggy proves it’s inconvenient to me, too) but I’ve loved the wintery weather. I miss it, though six weeks is enough. :)

We gathered at Mom & Dad’s on the day, exchanged gifts, and ate huge amounts of food. Ted made a stunning filo-dough-wrapped cod with shrimp stuffing and a cream sauce as our main course (a meal which my nephews failed to appreciate, because, as Dad said, sometimes you don’t like something and sometimes you’re too full of fudge to like something).

Young Indiana’s first Christmas was, I should say, a success. His parents got him a universal remote control and a dust pan, since those are his two favorite toys, and his grandparents and cousins got him cute clothes, board books, and other toys. He appears to like them all, since he’s been playing with them all. :)

I got an Alison Weir novel (THE CAPTIVE QUEEN) and the second two books in Kate Elliott’s GATE trilogy, plus a tea set so I now have mugs I like, yay! and can at least in theory provide tea for Irish visitors. :) And Mom made me an awesome teal sweater and I got a blank book suitable for writing a book for little boys in. :) Ted got an utterly gorgeous red sweater from Mom, a pile of books from me, and the moleskine recipe blank book he’d wanted, so overall it was a v. successful Christmas around these parts.

*laughs* I also got a massage from my sister, which turned into doing a bunch of acrobatic yoga (I didn’t know that was going to happen when I asked for a massage!), and it was HUGE FUN! I had declined to participate back in June when they did an hour-long demonstration (you will perhaps remember the photos of my mother being flung around), but I weigh 15 pounds less now and was feeling bolder, and now I want to go to Deirdre’s acrobatic yoga class every Friday night. :) Ted, who had watched with big greedy eyes while they did the demo in June, got in on the act as a base, and…well, let me just show you the pictures: 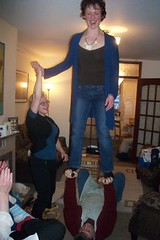 Ted is very strong. :) Deirdre was (and I think still is) agog over the ease with which he straight-armed her up there like that. :) I love her expression in the second one. She was so amazed. :)

*laughs* Deirdre made some lovely eggnog, which the entire family said, “I haven’t had that in decades, give me just the tiniest bit to try it,” and then had whole glasses full of. Breic downed his in a few gulps, turned to his mother, staggered a few steps and held out the glass in a wobbly hand to slur, “Hey, Mom, can I have shom more of that delishshoush eggnog?” Funny funny kid. :)

Deirdre’s friend Cindy had come over for Christmas, and while I was being turned upside-down and hauled around, I heard her say, gleefully, “This is a great Christmas! Loads of candy, and yoga acrobatics in the living room, and everybody likes each other!” So yeah, just a terrific day.

I’ll be surprised if I manage to post again before 2011, so Happy New Year just in cases! :)