no wexford, protests instead

I was going to go to Wexworlds this weekend but between train schedules being much less accomodating than I thought, the roads being dire because of poor weather, and the general exhaustion at this house, and Young Indiana being not as on-top-of-the-weather as he might be, we thought it might be the better part of valor not to go. Instead Ted, may a thousand blessings rain upon him, got up after I fed Young Indiana this morning, and sent me back to bed. I slept until 20 to 11, and only got up then because if I wasn’t going to Wexford I figured I should go to the protest. On the way into the city centre, the gardai presence was very visible, but pretty mellow: 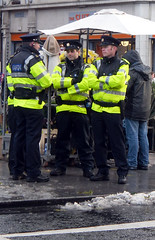 I’ve heard numbers from 50K to 150K bandied about, so I don’t know how many people were there, but it looked like a lot: 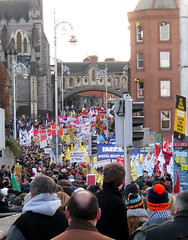 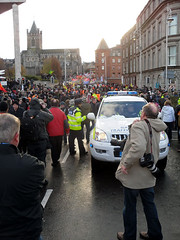 I ran into Deirdre as I approached the crowd (which, given that there were presumably at least 50K in the area, seems unlikely, but there you go), so I hung out with them for the first half of the protest. We got recorded shouting protest chants by somebody with a proper film camera, so who knows, maybe we’ll be on the news. And later after I’d broken off from them, I was interviewed by somebody for some news organization I didn’t catch the name of. So who knows, maybe I’ll get quoted somewhere. :) I ended up right outside the GPO with a good view of the screens and speakers and a good-looking RTE guy: 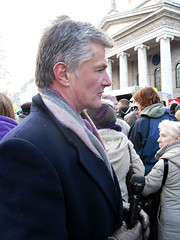 and took some pictures of signs I particularly liked: 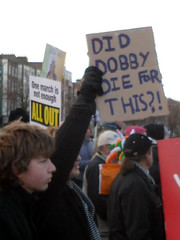 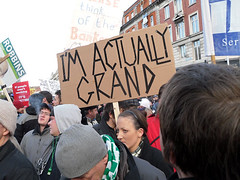 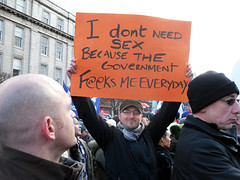 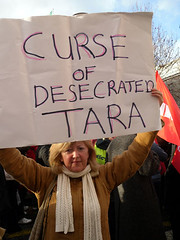 “I guess it didn’t work,” the woman holding the last sign said to me a bit despondently.

Anyway, so it was cold but good, and I’m glad I went.

Also, score. I have gotten myself a VIP ticket to the Bon Jovi concert next summer. Yay! :)