The Fabulous Lorraine, Spanish Ana, Young Indiana and I went to the Leprechaun Museum today. (Jeez. I need a cooler name than I’ve got, to hang with that crowd.) There is an optical illusion tunnel through which one enters the museum. The tour guide lad said, “Tunnels are often used to connotate entrance to another world, such as in Alice in Wonderland, Coraline, and others!”

Lorraine, Ana and I all stared at one another, and I said to Lorraine, “Do people *often* randomly reference works by your employer while you’re out and about doing tourist activities?” Judging from her gobsmacked expression and her response of, “Well, we’ll have something to Twitter about later!”, no, they don’t. :) It was pretty damned funny. :)

Because I have no dignity what-so-ever, I climbed up into the bed-sized chair in the room intended to make you feel small (“This,” Spanish Ana said, “is what Young Indiana feels like all the time.”): 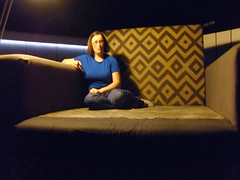 Spanish Ana looking a little mournful, perhaps because her tea cup is larger than her head: 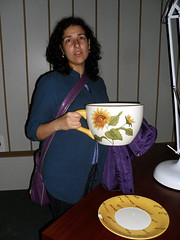 Oddly, I got no picture of Lorraine, so, er, instead, let me show a nifty glow map of Ireland:

I shall remedy the lack of Lorraine photos at the weekend, perhaps. :)

Post-museum, we went out to lunch at the very yummy Urban Picnic, where I’d never been before. There, I remembered to pass

knappenp‘s greetings on to Lorraine, which caused the second gobsmacked expression of the afternoon. “He gave me socks with bells on them,” she said. “Nobody else has ever given me socks with bells.” And here he’d been afraid she wouldn’t remember him. :)

To wind up this lovely day, my husband cleaned the kitchen and living room, and is now making gumbo. I tell ya, this is not a bad life. :)