I don’t know how I can be so busy. It doesn’t seem like I should be, and yet.

Mom came over yesterday to sit on Young Indiana for a couple hours while I worked. As a result, I’ve finished the synopsis for RAVEN CALLS, book seven of the Walker Papers, and today I’ll be doing the synopses for the last two books. I’ve been working on this series since Y2K. The idea that I’m writing the proposals for the final 3 books is pretty astonishing. And hey, I’m only…*eyes calendar*…a week and a half behind the schedule I wanted to be on.

His Own Small Self and I will be popping into town today to finish the errands we failed to do yesterday. (I like how I say “we”, as if Young Indiana was doing anything but coming along for the ride. :)) And tomorrow is Baby Cinema, which I have great hopes of actually attending. I don’t *think* I have any other errands to run tomorrow, and if I finish the synopses today as planned, it can be my reward. :)

*laughs* I thought I wasn’t too sore from yesterday’s Pilates session. And I’m not *too* sore, but I’m noticing every time I cough or turn or anything. Guess I did something right. And Ted pointed out that our small digital camera has video capabilities, so if we can find it perhaps I’ll do a preliminary Pilates For Normal People vid this weekend. I talked to my sister about it, and she likened the idea to the Couch To 5K Plan, which seemed very accurate to me. And here, for those of you who don’t know what I’m talking about, I’ll just reproduce my chat conversation with her last night, catie: I was thinking of doing my little “pilates for normal people” video since I’m starting over with my pilates workout and am totally pathetic. :)
deirdre: a pilates for normal people that you’d make and post?
or use for yourself or something?
that’s a good idea
catie: That I’d make and post.
The thing about Pilates videos (or workout videos in general) is that I’ve never seen one that doesn’t feature somebody already in phenomenal shape.
and although I, for example, know how to move my body and where my muscles are, even virtually all of the basic stuff I’ve looked at is simply beyond my conditioning’s ability to do it.
deirdre: so kind of a “couch to 5K” equivalent
catie: The Weight Watchers site has a handful of really rudimentary, like pre-starting-out-level, Pilates exercises, to which I added a handful of others I picked up from reading books.
Things that som–yeah, exactly.
deirdre: that’s a great idea
i support you :)
catie: And I thought that starting out with videos of me literally lying on the floor giggling because I cannot do one of the exercises was, you know, very reality based.
deirdre: heheh :)
catie: When I started doing pilates last year I did these preliminary exercises for about six weeks before I started doing the basics from a book.
Which was very successful for me.
And I thought, y’know, if I did a little video thing every three weeks or something, for progression…
deirdre: my friend emily (who teaches pilates) says to her classes, “you can do pilates but first you’ve gotta get STRONG!”
catie: I have friends who have said they’d like something like that, because frankly the videos you see online or can buy are just intimdating as hell.
Well, the Pilates stuff I’ve read says things like “it’ll change your life in 30 workouts”
and it’s unquestionable that after ten my core muscles were stronger.
But the “change your life” pitch is for people who can do a much more advanced workout.
deirdre: what they don’t say is that after 30 workouts the sky actually opens and dumps gold on you
catie: Dude!
I did more than 30 workouts!
deirdre: crushes small animals but most people find that ok :)
oh
damn
you were under the wrong section of the sky i guess :)

So if I do this and the sky opens and dumps gold on anybody, I get a share, okay? :)

And to wrap things up, a 3-month-old Young Indiana says, “Who, me?” 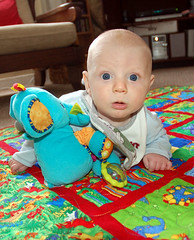