Ted and I got it into our heads while in Alaska that maybe we should make doughnuts sometime, since the doughnuts here aren’t very good. We got a recipe from Ted’s mom, and last week online a discussion of doughnuts came up, so I wanted to make some. I had only ever done so once before, and my impression was that it was a real pain in the ass.

We were making cake doughnuts, which have a very, very soft dough. Sticky soft, and difficult to work*. The recipe suggested using a well floured cloth-covered cutting board as the item upon which to roll out the dough. This was a very, very good idea, as it reduced the stickiness by a considerable margin, although still not enough to make it easy to handle. By the end of the process, the dough had absorbed enough more flour to be relatively handle-able, and neither Ted nor I fully grasp why the goddamned recipe doesn’t start with another half cup of flour to begin with. Next time I make doughnuts (which, judging from the time lapse between the first time I tried and today, will be in about 7 years) I’ll use more flour in the first place.

I also didn’t roll the first set thinly enough (note to self: rolling only half the dough is probably how to avoid that problem next time, seven years from now), so the first several doughnuts became Monstrosities From Beyond The Bakery, and absorbed too much grease. The latter was partly a matter of their size and partly a matter of the oil being the wrong temperature. Ted and I have discussed getting a candy thermometer for years, and concluded that if we were going to try doughnuts again we would need one. (I’ve never needed one for *candy*, but I find gauging oil temperatures to be much more difficult.)

Eventually we managed to get the dough to a handle-able consistency and thinness of rolled-outed-ness, and the oil to the right temperature, and the last dozen or so turned out pretty well. 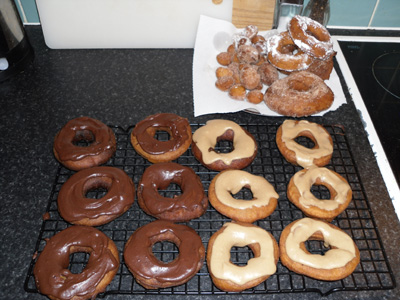 *My mom used to make doughnuts once in a while, but I’m afraid my only childhood recollection of doughnuts is Almanzo’s mother being disdainful of the new-fangled doughnuts with holes in them which required the cook to roll them over, instead of them rolling themselves over when they were ready, like her twisted doughnuts did. Both this and the first time I made doughnuts left me wondering how the holy bloody hell you create a doughnut dough which is solid enough to be twisted so it’ll roll over on its own, because it’s just so goddamned gooey. Mom says raised doughnut dough is less gooey, so perhaps Mrs. Wilder was making raised doughnuts. I’ll have to try them next time.