Rejoining the world of the bloggers after a very pleasant and almost entirely off-line weekend. We had a lovely time with

irishkate/Kate, and we all ate a truly tremendous amount of turkey, stuffing, and pie (they don’t have canned pumpkin here, so we ended up finding some fresh pumpkin puree, and Mom made the best pumpkin pie that any of us had ever had–and I’ve rarely met a pumpkin pie I didn’t like. Wow. No going back, now!), and lay around being comatose and content. :) Ted made homemade rolls and *wonderful* gravy (my mother makes utterly brilliant gravy, so there’s a very high Gravy Standard around my house: Ted’s gravy reaches it. So does mine, actually, after the Pork Roast Incident.) and just…wow. It was good. Om nom nom.

This morning I made fudge (a messier proposition than usual, when the spatula came apart in the marshmallow creme as I scraped it out of the jar, but it turned out all right) and while I was doing that the postman rang (once) and delivered unto us cover flats for the, wait for it, waaaaaaaaait for it…

…for the mass market editions of the Walker Papers! All 3 books will be re-released in mass market in June 2009, as a lead-up to the release of book four, WALKING DEAD in September. So there was much excited dancing and chirping and delight as we admired the covers. After so many years of publishing in trade, they look so SMALL! But they’re still terrific covers. Man, Luna’s done well by me in that department. So that was pretty exciting, really. (I don’t know why it’s exciting to get smaller versions of the exact same covers, but it *is*!)

Kate, wonderful creature that she is, drove us over to Argos, where we got uplighter lamps, only one of which came with a bulb, but even it alone has made a significant and fantastic difference in the lighting in the living room. I can’t wait for Ted to get back with bulbs for the other two! :) (oh, darn, the store didn’t have the right kind of bulbs.) And there was also a new pet supply store that’d opened up beside the Argos, so the cats now have new toys. :)

Ooh, Jupiter and Venus are in conjunction with the crescent moon! *runs outside to take pictures*! Aaah, kind of lousy pictures, I don’t have a good enough tripod/a remote at all, but that’s ok, it’s kind of nifty anyway: 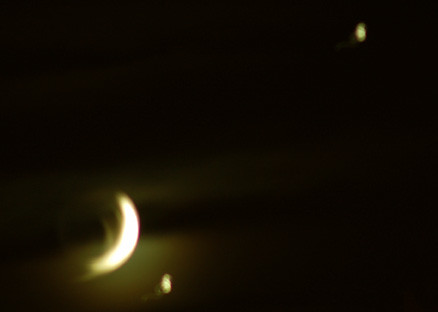