Going to London has utterly thrown off my sense of time. I’m fairly convinced it’s Tuesday. *Next* Tuesday. o.O

London was fun. I sold a few books and met several LJers, which was really wonderful. *beams* *waves to you all and makes noises of profound gratitude that you came*! I was also stalked by

sarahtales/Sarah Brennan, whose copy of HANDS OF FLAME says “Stop following me!” The next one will say, “I mean it, or I’m calling the garda!” and the one after that will say “That’s it, I’m getting a restraining order!” At least, they will if she’s kind enough to keep buying my books. :) Anyway, it was unexpected and pretty funny to see her there. :) I had dinner with lovely people and slept like the veritable dead on the air mattress that was provided for me. A very nice outing, all in all. I hope I didn’t give anyone my cold.

I saw the take-a-photo-now meme (Take a picture of yourself right now. Don’t change your clothes. Don’t fix your hair. Just take a picture. Post that picture with no editing. (Except maybe to get the image size down to something reasonable. Don’t go posting an eight megapixel image.) Include these instructions.) on Thursday morning before I left for London, so I took a photo: 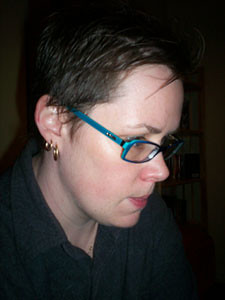 I have got the revision letter and all for THE PRETENDER’S CROWN. What I have not got is a functional printer upon which I can print out the SEVEN HUNDRED PAGE manuscript. But I have ordered a printer cartridge and hopefully it’ll get here by Tuesday. I’d been putting off working on this until after I got back from London, but now I’m sort of chewing at the bit. If I’d been brighter I’d have ordered the printer cartridge earlier, but finances prevented it. Dumb old finances.

CE Murphy.net has been updated with the past week’s worth of short stories. I’m sure you’re all very excited. There is also a helpful ‘donate’ button there if you want to. :)

I went swimming this morning, and the first couple hundred meters were surreal. Like an out of body experience. The swim club was in session, so the water was really choppy, and I felt like I wasn’t properly in my body. Like I was expending no effort at all in swimming. It was truly bizarre, and rather awesome. The feeling faded, but I swam my whole mile without stopping, just because it had felt so wonderful and light to get started, and I never did get muscle fatigue or oxygen debt. I’d like it to always be that way. I would also like to be swimming the 4K that those kids are swimming, instead of my measly 1700-2000 meters. :) Ooh, and I bought a new swimsuit today! I needed one. Mine was becoming distressing. Or rather, it had become distressed. Anyway, I has a new one now. It’s blue. There won’t be a picture. :)

This picture is for

agrimony, in apology for there being no hedgehogs in the Gryphon Beach story, but I will put it behind the cut, because one uncut picture is enough for most posts: 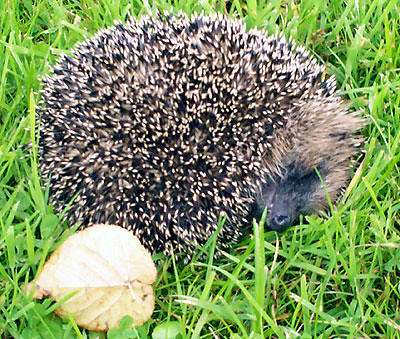