Sunday was practically quiet, comparatively, and yet entirely exhausting. :)

I ran into C.B. Cebulski at the Marvel booth, and re-introduced myself. He actually remembered me quite clearly from Dublin Comic Con–he asked about how the deal with the Dabels was going, etc–and said he’d be back in Dublin this fall for the convention. So I said I’d buy him a drink, and I’m extremely pleased for the opportunity to have met him again and re-establish a connection there. That’s the kind of thing I hoped to be able to do this week, so yay! And time didn’t actually work out for JG to introduce me to the Top Cow guys, but I did stop by the Image booth and talk to Kris Simone and Jim Valentino, which was entirely awesome. I hope I’ll be able to get something together to pitch to them by the end of this year. I have a mini-series in mind. I just have to, like, get the pitch for it written.

I actually didn’t talk *business* with Betsy until we ran into each other on Sunday morning and wandered around a bit. I guess TQB is doing pretty well, and she said they’d had an art department meeting for upcoming books/covers and she just said, “Do the same thing! Put her in profile or something, but basically, do the same thing!” which I was all for. :) And she’s read the first 200ish pages of PRETENDER’S CROWN and had only a very few notes so far, so that’s cool. I know the end needs work, and I think

arcaedia/Jenn’s right about cutting some stuff out of the beginning, but it’s really nice to hear it’s basically solid. Whew! :) She’s interested in something they can put out in mass market (I can’t tell if that’s in addition to the trade Inheritors’ Cycle books, or in place of, but it *sounded* like in addition to), so I said I’d have Jenn send her TRUTHSEEKER, which is a charming little book, and if they make an offer we can always figure out the details later. Can’t hurt. :)

I *finally* caught up with Todd Klein, who is an absolutely charming man, and to whom I said hello for

slovobooks/Pádraig. Inevitably, Todd wanted to know how to pronounce Pádraig’s name, which I explained wasn’t actually possible for normal human beings, and we had a nice talk and yes, I *did* get you a couple of signed bookmarks, Pádraig. :) I wasn’t bold enough, though, to ask him to design a logo for Chance for me, and I wasn’t clever enough to think to get a picture with him. He did, though, say that it was Pádraig’s fantastic interview with Alan Moore that made him decide Pádraig was the right sort of person to be interviewed by, so that was really cool. And we talked a bit about his own really fantastic essay series on comic book logos that he’s done on his blog, so it was all really pleasant and neat. And if I’d had more money I’d have bought Pádraig one of the very nifty lettering samples Todd had done, but, er, well, I didn’t. Sorry! :)

I got into the Supernatural panel (the only *actual* panel I went to all weekend, except the one I was on!) because the wonderful not-agent-Jenn and Reese had saved me a seat (by way of telling the redshirt con organizers that I was “in the bathroom” for the entirety of the previous Smallville panel. Apparently I *really* had to go to the bathroom.). But we had awesome seats, and there were many funny moments, ranging from the “Ghostfacers” from the show appearing to hijack the panel (after which the producer/head writer guy said, “You know, we really weren’t sure if that was going to work. We didn’t know if it’d be funny or really stupid.” Fortunately, it was funny. :)), to an audience member asking what Japanese horror films had inspired the Supernatural filmography, and Jared Padelecki thinking they’d said “Japanese whore films”, which made him turn bright red and hide behind the panel table for about forty seconds. Sadly, I failed to take a picture of that. :) Also, when asked about Sam’s love interest in the upcoming season, the head guy looked kind of like a sly six year old and said, “You want to know the truth? I just called her the love interest because you guys get SO UPSET when we mention something like that. I couldn’t resist.” :)

We got the first 5 minutes of the first episode of season 4, and they were AAAGH SQUEE *LAUGH* AAAAUGH!, pretty much. :) And when we got out, my brain just switched over to white noise and whsssssssssssssh, that was it for the day. No more Kitbrain.

Fortunately, not-agent-Jenn and Reese herded me to all the places I needed to be, which included a reading for the California Browncoats (that was fun!) and then down to the dealer’s room to finally meet Les Dabel, who at least *sounds* enthusiastic about the Chance project. Also failed to meet some guys at Dark Horse, though I met a woman who said she’d do email introductions, so that’s cool. It was a good networking weekend.

Then not-agent-Jenn and Reese took me away in Petite’s boyfriend Kasuge (which apparently means “red pony”): 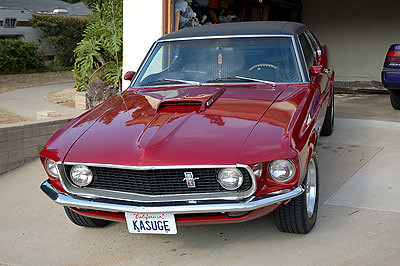 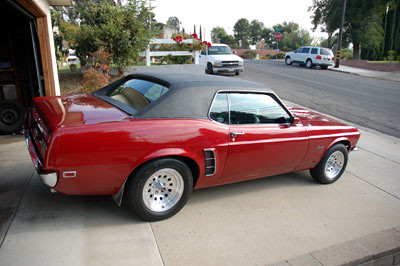 No way can the Avalon stand up to *that* sexy beast. Petite’s got a boyfriend. I’m gonna write him into one of the Walker Papers if I can. :)

And then they brought me for The Best Chinese Food, and it really was. Wow. *Really* good. We had a wonderful time at lunch, and nobody seemed to mind that my brain was full of white noise. :) After lunch, we raced over to the Mysterious Galaxies bookstore, where I signed what stock hadn’t gone to the con with them, and bought some books for the plane ride home. Then I was taken back to their place and regaled with wonderful, unlikely, and very very funny stories until around 10pm, when I declared it time to collapse into bed. It was *wonderful*. Jenn and Reese are lovely, lovely people, and I enjoyed myself thoroughly.

On the plane coming home, the guy across from me was coming from Comic Con, too, and told me how he’d met Stan Lee in an exchange that went something like this:

Guy: OH MY GOD, YOU’RE STAN LEE!
Stan Lee (with all evident sincerity and equal enthusiasm and amazement): OH MY GOD, I *AM*!
*lots of excited hand-shaking, then Stan charges along, sweeping the guy up in his wake*

I was terribly jealous. *beams* :) And then on the plane from Newark to Dublin, a British guy walked by, saw my SDCC t-shirt, and said, “Did you go to that?” I said, “Yeah, just on my way home now,” and he passed me mumbling, “Maaaaaannn…”

So overall, it was a pretty fantastic week. I’ll post more pictures tomorrow or the next day. I’ve had two solid weeks off, and I’m afraid I gotta get back to work.