Looking at my notes, apparently the Dabel Brothers panel was on Thursday, so technically this should go under that last entry, but oh well. Short version: Chance didn’t get announced and I’m frustrated by that. I don’t know when it’s even going into Previews–it didn’t make it into this month’s as it was supposed to, so right now I’ve got no publication date on it. Maybe I’ll get one by next week, as I did get a chance to talk with them on…Sunday, and they’re having a full team meeting later this week, but right now I’ve got nothin’. I’ll let people know when that changes.

…completely not-really-related-except-sort-of, I’m considering launching a forum-based website for Chance/my writing sometime toward the end of this year, except reality says I’m not actually the person to run it. If anybody’s interested in helping me design/moderate something like that, let me know, huh? I don’t actually know if there’d be enough traffic to bother, but it might be worth thinking about.

I had breakfast…Friday, I guess, with JG and his lady friend, who is quite wonderful, and then went over to the dealer’s room to try to find Todd Klein (I spent the ENTIRE WEEKEND trying to catch up with him…). I found Wendy Pini instead, and babbled at her a little, and then–extremely fortunately–ran into Angie, who pointed out to me that my panel was at *one*, not at two, and without whom I would not have made it to my panel or the signing afterward. Which would have *sucked*. So Angie is a Hero of the Revolution, man. Wow. O.O

Our panel was huge fun. I didn’t actually get to *meet* Kelley Armstrong, which is sad, ’cause I’ve got the Fantasy Medley anthology with her coming up in March, but I hit it off hugely with Lilith Saintcrow, and L.A. Banks is a scream. Somewhere midway through the panel one of the authors was talking about her childhood obsession with whaling, and how that had become part of one of her stories, harpooning and all, which caused Lili to say, “Wait, wait, are we talking about *harpooning*… or harpooning?” with a deepened voice and a waggled eyebrow. The rest of the panel we were useless and kept coming back around to harpooning, ifyouknowwhatImean. :) The hour just blew by, and we all agreed we could’ve stayed there for hours more, just having a hell of a good time. :)

Then we retired to the signing, which went delightfully well. Someone from MySpace stopped by, which was awesome, and then the manga artist I’d been moping over not remembering her name came by! I was so excited! There was leaping around and squealing! I think she (her name is Lanny Liu, which I will never again forget) was a little taken aback at my enthusiasm. *laugh* I think she thought she was supposed to be excited to get to meet me, not the other way around. :) Anyway, so I talked to her a bit about possibly doing a project for Del Rey, so later when I’m done with the fourth Walker Papers I can put together a pitch for their graphic novel line (and for DC’s Minx line, for that matter). SO EXCITED! YAY!

Friday afternoon’s mostly a blur. I hung out in the dealer’s room. I visited–not necessarily during Friday, but sometime during the week–with the Sofawolf guys, who are extremely nice, and I went by the Browncoats booth to talk to them about my reading on Sunday, and I dropped by the Bushi Tales booth to see if I could catch up with Scott Clark. I eventually did–on Saturday–but prior to that met Derek, who’d done the inks for the first (and maybe second, I donno!) Chance cover, and talked with them a while. And I think it must’ve been on Friday that I did a Suvudu interview, but I honestly can’t remember. It was fun, though. I talked too fast, but I always do. :) I’ll post when that’s up online, sometime in the next few weeks.

Saturday I *did* finally manage to catch Scott, who turned out to be quite fantastic. Really nice guy, and I got to talk with his wife quite a bit ’cause Scott was there to be famous and stuff. Somebody brought by what Scott thought was his first professional work, so old he said it was like looking at something he remembered *reading* once upon a time, more than remembered drawing it. So we all hit it off, which was great. He’s the first person on my team I’ve actually *met*. :)

*laugh* On Saturday, when I was talking with Scott, a guy walked by and I thought, “Wow, that’s a really good looking gu–WOW, THAT’S A REALLY GOOD LOOKING GUY ZOMG THAT’S HILO FROM BSG!!!!!1!” 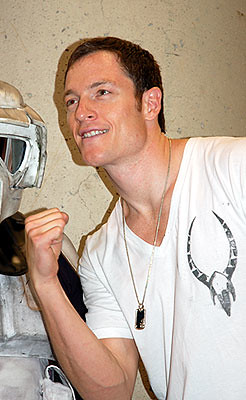 That was basically the closest I got to a celebrity all weekend. :) Well, except the bit where I walked right past Jim Lee. Er. And the part where I was hanging out with JG and Jim. They don’t count, or something. I know them. :)

On a similar topic, I was waiting for Jim and Cam to show up for our breakfast date Saturday, and there was this guy over there wearing a Bureau of Paranormal Research & Development t-shirt, and he looked really familiar. I was trying to figure out why–had I met him before? Should I know who he is? Should I be going over to re-introduce myself?–and finally realized that it was MIKE MIGNOLA, and the reason I recognized him was because I’d seen him on the Hellboy DVD extras. *headdesk/laughter*

Sunday, on the way out of the Supernatural panel, there was an *extremely* good-looking young man sitting along the wall, and I *totally* got busted while checking him out. So did one of the other women I was with, Sally, who was so mortified by being caught I thought she was going to spontaneously combust. I, however, had absolutely no shame, and kept right on ogling him, and got a grin and a wink for my trouble. I don’t think I’ve *ever* gotten that busted. It was hysterical. :)

Right, right, anyway. :) Friday evening I’d double-booked myself because I’m an IDIOT, but I got it straightened out and went to dinner with Betsy and other Del Rey people, including author Karen Traviss, who makes me look like an absolute piker in wordcount. (She writes twice as fast as I do. Literally. 50K a week. Holy *moly*. O.O Fortunately, I feel no need to compete, but *damn*!) It was a really fun evening–*excellent* food, and we were all pretty tired, so everything was very very funny. :) The visualization topic came up, and it turned out Betsy doesn’t visualize either. I thought that was interesting. :) One of the women at dinner was the foreign rights sales woman, who says the UK is the hardest market to sell to, in part because the pound is so strong right now it’s easier and cheaper for everybody to just order books from America. Hrmph. But they’re working on foreign sales for TQB, so that’s good to know. :)

I was late to my signing on Saturday ’cause it took longer to get breakfast than we hoped/expected, but people were extremely kind and waited around or came back (I was only a few *minutes* late, but still), and went to lunch with the Harlequin people afterward. We’d been going to have dinner that night, but they had to reschedule, so I ended up blowing

autopope/Charlie off (waugh) because I didn’t have the right access information to let him know I had to reschedule. Snivel. But the signing went really well! A lot of people came by (free books are a good incentive, but a lot of people who already knew who I was came by!), including J.F. Lewis, who’s a writer who emailed me a while ago. His first book just came out recently and we share a cover artist (Chris McGrath) and stuff, and so getting to meet him was very cool. We took a picture with his 4 year old’s toy rat: 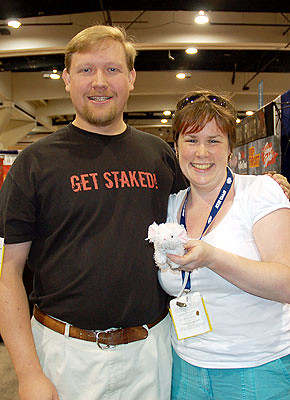 in order to help prove that Jeremy had indeed remembered to bring the rat along so he could keep an eye on everything that was happening at ComicCon that weekend. Awesome guy, awesome dad, awesome rat. :) That was fun. :)

I totally missed the BSG panel on Saturday, which made me sad, ’cause it was one of the few things I really *really* hoped I could get to. OTOH, it happened to mean that I walked into the dealer’s room just in time to see “Bellechere” (the Myspace woman with the Rogue hair in the previous entry) being interviewed by The Tonight Show: 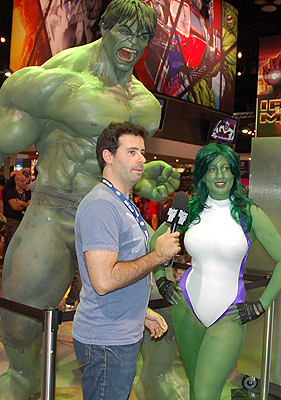 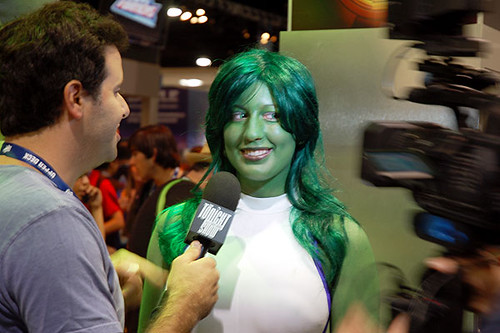 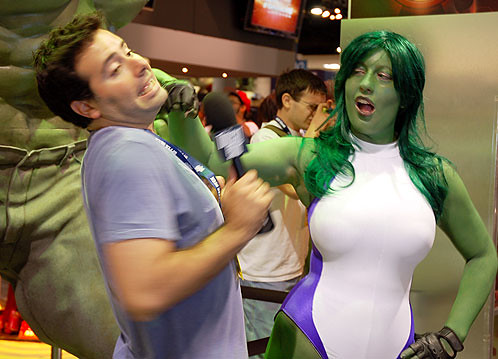 *brainrattle* Let’s see. Saturday night I had dinner with my hotel-mates, which was really nice! I hadn’t actually gotten to hang out with them very much, so I had a lot of fun. *beams* And good food, too, wow. Mmmm. Mexican. Yay Mexican food. There’s not a lot of that here, y’know. :) Then I decided it would be my one late night, and went back to the con to see the screening of the first 3 “Wolverine & the X-Men” animated episodes. They were very good! I really liked the character design, most of the animation was very good, and I swore I thought Magneto was actually voiced by Ian McKellan. He wasn’t, but damn, it sure sounded like him. It’s going to be 26 episodes, 21 of which are part of a big story arc and 5 of which are stand-alones. I’m looking forward to seeing the rest of it.

Then, since I was already there, and because I wanted to at least be in the same room as Ron Perlman, I stayed for the screening of “The Mutant Chronicles”, which was … well, it’s terrible. It’s a B movie, and it’s terrible in the way you expect a B movie to be. It had some fantastic aspects, though–the cinematography is awesome, the steampunk style is really cool, and the women kick ass. It’s also incredibly violent. The opening sequence, in particular, is way too long, loud, and violent. It’s about 20 minutes long, and it needs to be 3-5 minutes. I’ll grant I’m probably not the target audience–except, y’know, I’m a 35 year old female with a crush on Ron Perlman, and will see almost anything he’s in, and there are kick-ass chicks in the film, so in a way I *am* the target audience–but that opening sequence really needs to be cut down. This was the first screening for the movie anywhere, and they were looking for audience feedback, so I’m going to hie myself over to their website later this week and give ‘em some. I’d kinda like to see that in a big theatre, just ’cause…well, ’cause Ron Perlman. :) Whose eyes really are awfully damned blue. Also, Devon Akoi, who is one of the aforementioned kick-ass chicks, is *gorgeous*, and as far as I can tell, Thomas Jane is an incredibly, incredibly nice man. He came out a few minutes before the movie to let people take pictures with him, and we got what can really only be interpreted as a Joker/Punisher smackdown scene. :) 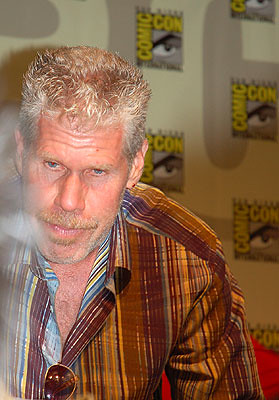 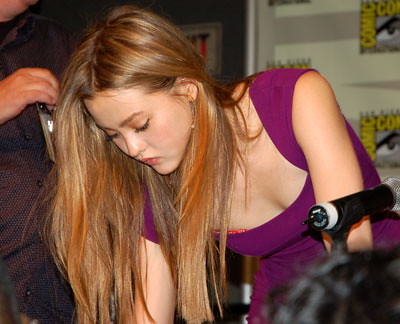 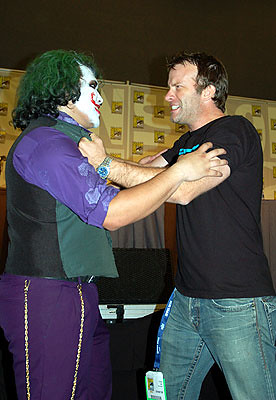 Sadly, I didn’t get to meet Mr. Perlman and get him to call me Catherine, so I’m going to have to arrange to be in his presence another time. I have, however, at least been in the same room with that voice, and my god, it’s as good IRL as it is on screen. Dear gods. *staggers around*

So that was my one late night. I got to bed around 1am or 1:30, and got up around 7 on Sunday, which ended up being the day Con Lag really hit. Not a surprise, really. :)

Ok, I have to go make cornbread, so I’ll post Sunday and the trip home later on. Whew. :)