There is a universe in which my photograph is smack alongside photos of Jensen Ackles and Jared Padelecki in somebody’s flickr set. Bizarrely, it is *this* universe in which that has happened. Sadly, I wasn’t any closer than a photograph, but still, that’s pretty cool. :) I’ll post photos in a while here, but really,

wedschilde/Reese’s photos are 23459870 times better than mine, so just go browse her flickr set. :)

So. ComicCon. how ’bout I just put it all behind the cut, ’cause we all know this is gonna get long… :)

First off, I have become more Irish than I knew. I found myself in a strange land where I looked the wrong way to cross the street, looked at the wrong side of oncoming vehicles to meet the driver’s eyes, expected whipped cream to not be sweet, and could really taste the preservatives in desserts. In this land, I converted dollar prices to euros, and was surprised when black people sounded American instead of African. Actually, I was surprised when white people sounded American instead of Irish, for that matter. Really weird. And

lithera/Kat said I hadn’t picked up the accent, but that my cadence had changed for the Irish. I think I’d lost that by a couple days in, but the first day or so, she was definitely right.

I staggered into San Diego around midnight-thirty (a good 90 minutes after I’d been supposed to) and Kat, bless her a thousand times, was waiting outside the hotel for me. I dropped into bed, woke up at 7:30 the next morning, and was *totally* on Pacific time all week, without a hitch. That was awesome. No jet lag, no exhaustion, no nothin’, just *boom/switch*. I got to meet the oft-mentioned Holly and Krys and Lys, and the to-me-unknown Alan, Ivan and Laura, all of whom were lovely people that I abandoned for pretty much the whole week. :)

Saw Dark Knight on Wednesday. I’m possibly the only person on earth who liked Katie Holmes’s Rachel better than Maggie Gyllenhall’s. I also got the worst sunburn I’d had in years, bad enough that I started telling people I was auditioning for the role of Hellgirl in the 3rd movie. I’m peeling now. I can’t remember the last time I burned badly enough to peel. I forgot the sunlight’s a lot more direct in San Diego. Ow.

Managed, after some finagling, to catch up with

aelfsciene/Angie for dinner on…it had to be Wednesday. It was sheerly *awesome*. I don’t think I’ve seen her since we left California. So we had a wonderful time chattering at each other, and retired to Ghiradelli for dessert (mmm, hot fudge sundae!), then staggered our separate ways (there was a lot of staggering this week) for sleep. I didn’t do the Preview Night madness, partly because I only brought a carry-on to California and was attempting to avoid having to buy more/check luggage on the way home, and partly because I wanted to see Dark Knight more than I wanted to stand in line. :) Of course, after all the trouble, I didn’t hear a damned word about the movie all weekend except when I brought it up, so I wouldn’t have been spoiled anyway. *eyeroll* :) I did wander through the dealer’s room like a kid in a candy store that night, and met up with

wedschilde/Reese, who gave me a phone (which I promptly broke) and saw people I knew at the Mysterious Galaxies bookstore booth, and ogled the Iron Monger, which was one of the goddamned coolest things I saw that weekend: 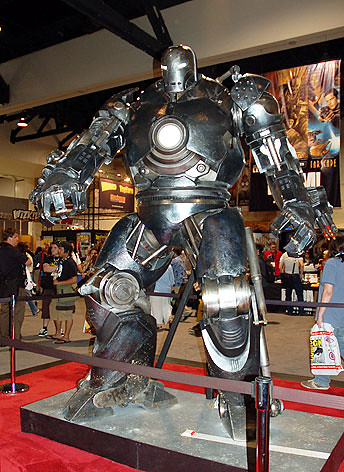 The thing was frickin’ huge! It was like ten feet tall! Check out the girl walking behind it over on the right there. Even given allowance for perspective, that thing was HUGE! It was one of my favorite things about the con, though I think the four year old Wonder Woman took the cake: 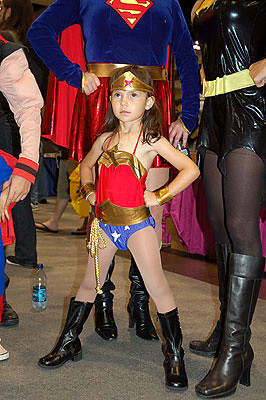 The sheer overwhelmingness of Wednesday night made me think on Thursday morning that I must be halfway through the con by then. Then I was like, “…no, it hasn’t even started yet! AI!”

Thursday morning I met up with

shoka/Andrea, which was totally nifty, and we talked for quite a while before I randomly saw Michael Carroll and his wife Leonia whose last name may not be Carroll, I don’t remember, who are from Ireland, and with whom I’d been supposed to have lunch but I, er, failed. :) I figured having failed to make my appointed time with them, I’d never see them, but in fact I kept running into people all weekend. 130K people and I still managed to just happen to find people. V. bizarre.

Aside from meeting Andrea, basically *none* of my plans for Thursday came to fruition. I didn’t get to the Doctor Who or Torchwood panels (but heard about them from the people I was staying with, which caused me to writhe in cheerful envy). Then my cell phone # for JG didn’t work, so I just went and got in his signing line (actually, that was pretty funny), where I was standing when John Vaughn, also an Irishman, showed up quite randomly. We chatted for a bit, and then he went his separate way and then TOTALLY randomly, the woman whose Rogue hair I admire so extensively on MySpace walked by in her Anna Mercury costume (which I failed to take a photo of, ’cause I’m a dolt), so I got to talk to /her/, which was cool. Here she (and her husband, who I saw as Nick Fury and Mister Sinister over the weekend) are, out of costume: 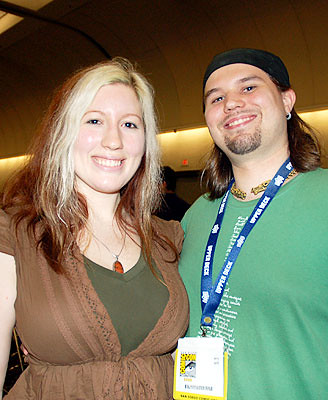 JG did a classic double-take at me being in line, gave me a hug, and we arranged for me to come back when he was done signing so we could wander around and talk a bit. We ended up hanging out next to a garbage can exchanging gossip, which reminds me that Ted’s supposed to email him to talk Sekrits of Cajun Cooking. He seems to be doing really well–the success of “Wanted” has got all their heads spinning–and it was utterly fantastic to see him again. I oughta see if I can get the Dublin Comic Con to bring him over next year or something. 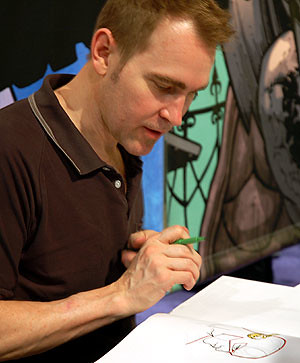 I bobbled off and ran into

jlassen/Jeremy Lassen of Night Shade Books, and then into Jim Butcher and 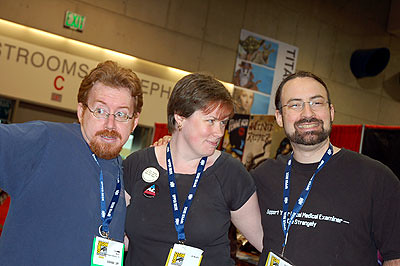 I went to the Random House panel, where I discovered to my fascination and excitement that they’re doing original graphic novels as well as, er, non-original ones. I had no idea, and promptly wished I still had the email address for the manga artist who’d contacted me six months ago when I was looking for a new Chance artist. But I lost it when my computer crashed, and I couldn’t remember her name. :( And Betsy talked about a bunch of upcoming Del Rey books, and mentioned books by everybody who was at the con, including me and TQB. They were doing a powerpoint sort of presentation, so there were book covers up on the screen, and the gooooooooorgeous boobalicious TQB cover was up there, and Betsy said, “Catie, would you like to stand up and expose yourself?” (so that people could see who I was) and I was like, “Yeah, but not as much as *she* has!” and gestured at the screen. So that got a laugh. :)

That evening was the Random House party (which made Angie laugh out loud when I said it; she now wants to name a band “Random House Party”), where I failed to actually meet Peter David, but did an idiot fangirl squee over him anyway. I staggered off pretty early, though, and went back to the hotel and collapsed, ’cause damn, that con is tiring!