today is a day for minutia

Yesterday I took the day off (not so much because of the failed computer, because I write on a different computer, but because I needed it) and worked on my sunburn. It was practically the only opportunity there’s been this summer to work on it, so I did a nice job: 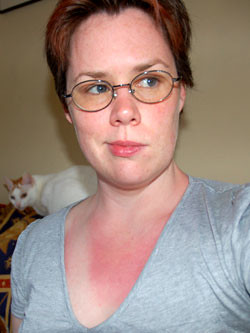 That comparatively white stripe there is where my purse strap was slung across my body. A wise and clever Kit I am not.

Yesterday my husband carried a tree home. I admired his manliness. :) It’s an apple tree! I come from a land where food does not grow on trees, so I’m very excited. (I said that to Ted and he looked at me like I was a nutcase. After a while, though, he had to admit it was true. I *do* come from a land where food doesn’t grow on trees.) Later today I’ll go out and put our tree in a larger pot than it’s currently in. It will be wuvwey, as my nephews used to say. Possibly Seirid still does. They’re coming out to visit my parents for a few days. We haven’t seen them in a few months, so that’ll be cool. Yay! :)

I need to either go to the phone store and get a SIM card that will work in the States, or I need someone to verify this amazing story that my parents told me: that you can buy a throw-away pre-paid phone at, like, Walmart or gas stations these days. Is this true? If it is, can I impose upon someone in the States (er, ideally somebody in San Diego, I suppose, certainly someone who’ll be there) to pick one up for me, and I can Paypal or repay you next week? That would give me a cell phone number over there that I could hand out while I still have email access, which would be V. Handy.

Today I could do fun things, like work on my Project365 photos (boy, i’ve really fallen down on that. I’ve missed at least a week by now, I think…). I could, except I have One Zillion Things that need doing before I go to San Diego, and today I must accomplish at least one and possibly two or three of them. So, thinks to do:

(…those are all really pretty easy to accomplish today. cool.)