I just got the unfinished painting for the cover for Chance #2. OH. MY. *GOD*. I donno when I’m going to be able to show it off (not for a while yet, because the comic’s going to *preview* at San Diego, and *launch* in September, rather than launching in July as previously thought), but OH MY *GOD*. Responses from the handful of people I’ve shown it to have been: “Um. Jesus Christ”, “oh NICE”, “super hot”, “oh my GOD”, and “I’d buy that,” which I correctly interpreted as “I’d hit that,” at which point I was told by the guy who said “I’d buy that” that 1. he’d been restraining himself from saying “I’d hit that,” and 2. that I was such a boy. *laughs* Holy matrimony, Batman. *Damn*. O.O

Um. Right. In other news, THE PRETENDER’S CROWN is now officially the longest book I’ve ever written. Weirdly, it’s still 25 or something pages shorter than TQB, but the wordcount is higher. Must be less dialog or something.

Ted took me out of the house this afternoon and brought me to Fota Island, where we had a very nice time trundling around the wildlife park taking pictures of cute animals. So here, have a lemur: 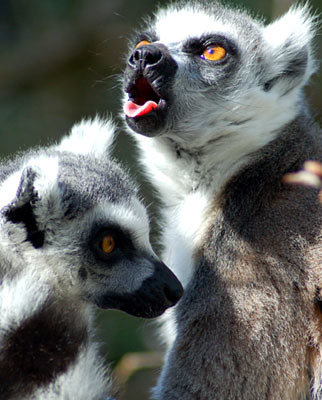