This collection has one reprint, “Perchance to Dream”, a Janx story also available in the anthology DRAGON’S LURE. It has the ORSSP stories “Awakening” and “Aftermath” (which was the surprise bonus story for ORSSP patrons who subscribed to the ORSSP in the first 5 months of 2011). The other two stories, “Betrayals” and “Choices,” are brand-new. 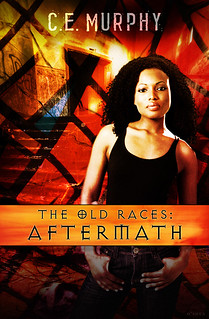 Margrit Knight has broken the long-held covenants of the Old Races. Ancient rivals are scattered, friendships are broken, and the dragons, djinn, selkies, vampires and gargoyles are beginning to step out of the shadows and into the light.

But the new world may not be what they expect. Dragonlord Janx faces more than he bargained for when human magic interferes with his own. Half-vampire Ursula Hopkins is only starting to understand what she may have unleashed by awakening her brethren, and Margrit Knight herself still has debts to pay after the death of a djinn…

Watch the future unfold in these five new stories of the Old Races!

Buy the AFTERMATH collection:
at Amazon
at Barnes & Noble
at Smashwords

Links to all the blurbs and various places to purchase the e-books are available through this nifty animated ad that I made:

(I made the ad for Bitten By Books, but because it’s animated it was TOOOOO BIG for them. But I liked it enough that I wanted to use it, and, y’know, if you want to, you can too. :))