My other nephew's book has arrived! Squee! Christmas is sorted! Except one other thing for my brother-in-law, but besides that, sorted! And, er, y'know, putting the tree up and finishing wrapping presents. And I'm realizing just how many copies of the first nephew's book I should've ordered but didn't--there are a *lot* of kids in the family who are the right age range for it. So I'll have to get a few more and send them out after Christmas. In the meantime I've got all the immediate needs dealt with, and I'm happy about that. *does a little dance*

Young Indiana and I went to the zoo today. A peacock thought his snack looked pretty tasty: 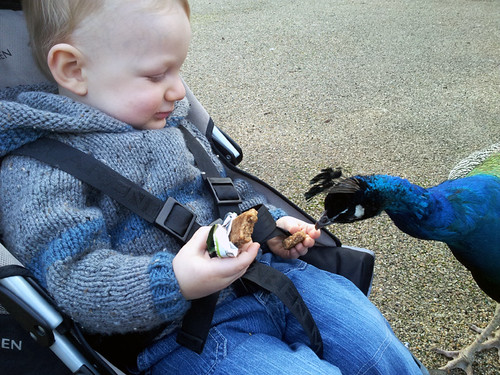 Also, Santa was there, so we had his picture taken with Young Indy: 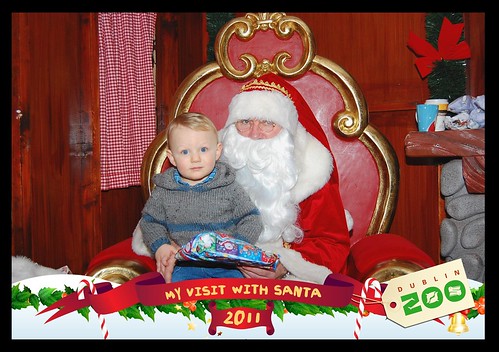 The new gorilla grounds are fantastic. I got a great picture of Daddy Gorilla, but I haven't gotten it off the phone yet. I'll post 'em later. Oh! Right. Someone asked for me to post a picture of my new hat: 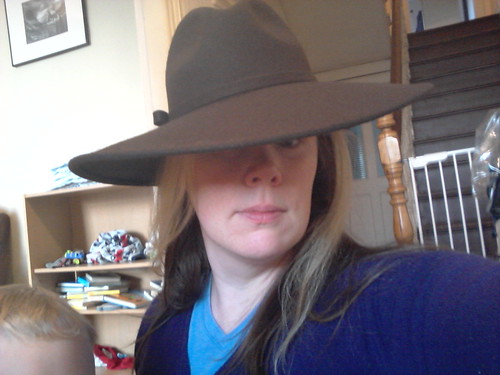 Yesterday I made fudge worthy of giving to my family. It's all the fudge I'm making this year. (Sarah said, "But. But!" and I said no, no, the problem is butt! BUTT!)

I had some stuff--not wrong, just not fully right!--about the Maya calendar: We're coming up on not just the end of the 13th b'ak'tun, but also the 5125 year long count, which is...I mean, c'mon, lads, that's worth celebrating, innit? Even if we're not of Maya descent.

Unlike, say, the lovely folk who built Keinmer Mound in northern Georgia, where archaeologists have apparently found the ruins of a Mayan city from ELEVEN HUNDRED YEARS AGO! HOW COOL IS THAT!!!! (Upon seeing this story, I said, "I think I feel a new fantasy novel coming on!" Evidently that's not a normal response. Who knew?)

I think that's all for now. :)
Collapse