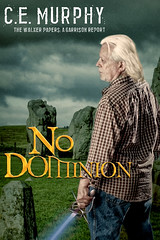 Okay, so the thing about the upcoming Kickstarter campaign (launching October 1!) is that I really *can’t* use a teaser from the actual story as part of the incentive text, because it starts with a scene from RAVEN CALLS and no way no how am I spoiling that scene. :) So I’ve written the first couple chapters of URBAN SHAMAN from Gary’s point of view for a bit of flavor text as to what kind of voice the novella will be in. Enjoy!

Three days after my 73rd birthday, a leggy brunette climbed into my cab and changed my life.

She was rude, snapping, “Drive,” without even lookin’ at me. That kinda fare always set my teeth on edge, superior and holier-than-thou. Never judge somebody by how they treat you, judge ‘em by how they treat the cabbie.

Still, drivin’ paid the rent. “Where to?”

I eyed her in the mirror. There was me, pretty hale for a guy that age, with all my hair and teeth I wasn’t sayin’ either way about, and there was her, twenty-six and pretty in the way women who don’t know how well they’re put together can be. She wore her hair real short, which I thought most dames should. What with her doin’ something on a notepad, scribbling and muttering, I couldn’t see her eyes to tell the color. She looked tired, though, like she’d come off a European flight, not just something continental. I said, “Northwest, the airline? It’s just a couple feet up the term–”

She snarled, “To the northwest.” I glared at her and drove. A minute later, as if she hadn’t started out rude, she asked a favor: “You got a map?”

No self-respecting cabbie would admit it if he did. “What for?”

“So I can figure out where we’re going.”

I turned around and stared at her.

Watching the road was for sissies. I twitched the steering wheel and cars merged around us, safe as houses. The fare slumped in her seat, green eyes wide, and got politer: “Do you have a map, please?”

“Yeah, yeah, all right.” I threw a city guide over the seat and listened to pages rattle as she shuffled through them. A couple minutes later she said, “Okay, we’re going to Aurora.”

“You sure? That ain’t such a good neighborhood, lady.”

“I’m sure. I’m trying to find somebody who’s in trouble.”

I lifted my eyebrows at her in the mirror. “Good place to start.”

She scowled at me. I smiled back, my best patented seen-it-all smile that told pretty young things not to mess with me, and instead of messing, she asked if I
had a cigarette. I shook my head. “Those things’ll kill you, sweetheart. My wife died of emphysema on our forty-eighth wedding anniversary. You want a smoke, kid, find it somewhere else.”

She looked embarrassed, but didn’t have the smarts to quit while she was ahead. She muttered, “I’m not a kid,” and I eyed her in the mirror again.

“You’re twenty-six, doll. From where I’m sittin’ anybody less than fifty is a kid.”

Her jaw dropped. “Nobody ever guesses my age right.”

“Gets me good tips, especially with women in their forties. I give ‘em a big story ’bout how I always get ages right, and then I lie. Works like a charm.”

“You guessed my age right.”

“No point in lying. I never met anybody who didn’t want to be in their twenties. Look, why’re you headin’ to Aurora, doll? Nothing there but trouble, and you don’t look like the type.”

“I told you.” She put her head against the window. “Somebody’s in trouble. I saw her from the plane.”

That made my life a lot more interesting. I put my arm over the passenger seatback and twisted to stare at the fare. “You’re trying to save somebody you saw from an airplane? What the hell, you got some kinda hero complex? How the hell’re you gonna find one dame you saw from the air?”

“It’s basic math, for God’s sake. I got the approximate height and speed we were traveling from the pilot, so figuring out the distance wasn’t that hard, and I saw a modern church on a street with only one amber streetlight. If I can find it before the lights go out–”

“Then you’ll be the first one on a murder scene.” My day was gettin’ a lot more interesting. The guys back at dispatch would love this one. I was gonna get free coffee for a week off this story. Couldn’t let her know I was lookin’ forward to whatever came next, though, and it was only God’s own truth when I said, “You’re nuts, lady, and desperate for thrills.”

She snapped, “Like it could possibly be any of your business,” which was true enough, but I never met a cabbie who didn’t think everything his fares did was his business.

“Relax, sweetheart. A pretty girl like you oughta be on her way home to her sweetie, not–”

“With your personality, I can’t figure why not.”

The fare put her face in her hands. “Haven’t you ever just really felt like you had to do something?”

“Yeah, sure. I really felt like I had to marry my old lady when she got knocked up.” It wasn’t true, but the fare had gotten in my cab, not the other way around. She got whatever story I felt like tellin’ today. That was the beauty of driving fares. Them, me, we were all different every time. “I never felt like I had to go chasing broads I saw from airplanes, though. I got troubles of my own.”

“Yeah, well, maybe I’ve got enough that I need somebody else’s to make the load seem lighter.”

I grunted, surprised. Usually kids in their twenties were way too young to realize that helpin’ somebody else eased their own burdens. I warmed up to the fare even if she was rude, and nodded at the rear-view mirror. “Arright, lady. Let’s go find your corpse.”