A friend of ours won a free screening of any film she chose, and chose “The Princess Bride”, so yesterday we and about a dozen other people were treated to a big-screen showing. I haven’t seen The Princess Bride on the big screen since it came out, and I must say, aside from the audience-wide chuckle at Fred Savage’s cutting edge 1987 Atari baseball game, it has aged flawlessly. Every time I see that movie I hope everyone involved knew just what a wonderful, wonderful film they were making. It’s just perfect. Go watch it again, all of you. It’ll make you happy. :)

Also, Carey Elwes was so pretty. Good lord. So pretty!

Then we went straight from that to Harry Potter 7.2, which was also pretty good. I am still pissed off that the two moments in the books I most wanted to see in the goddamned movies didn’t make it in. I can’t even remember the first one–it was from one of the earlier books, and all I remember now is that I was deeply annoyed that it didn’t get in–but the second one was from HP7.1 and I cannot fricking believe it wasn’t there. I even held out some small stupid hope they would address it in 7.2, but they didn’t, and GHALGHGLHGL.

However, aside from that–this one was for the fans, is what I’d read, and if you weren’t a fan don’t bother dissing it because there’s no point in pissing in other people’s cheerios. And I agree. It was for the fans and they did a pretty good job. I thought Mrs Weasley’s big moment was sadly underdone, and I still think it would have been better as a 3 hour movie with the first 20-30 minutes being an extremely condensed version of 7.1, which was mindbogglingly dull. But overall: good job, guys, good show, well done, thank you for TEN YEARS OF YOUR LIFE (most particularly thank you to the three leads, but to everybody, because *damn*, what an undertaking!).

And I got to swing by Chapters and have a little bookstore accident. I came away with half a dozen Napoleonic era books (including one social history, 1789-1835, which is exactly the era I need, a book about courtesans of that era, another social history about the months leading up to Waterloo (possibly called DANCING TO WATERLOO, I forget), a Napoleonic spy network book, a couple war histories) and, um, Kim Stanley Robinson’s GALILEO’S DREAMS, which I don’t know when I’ll have time to read but by George at least now I own it. :) Hell, I don’t know when I’m going to read the histories, either, but they all look really interesting. :)

I think Alma Alexander will not remember this, but I met her once. It was at one of the Writers’ Weekends in Seattle, probably before I got published, or possibly the very summer I got published, in 2004 or 2005. I idled by her table during a signing, picked up her books THE HIDDEN QUEEN and CHANGER OF DAYS, and said “Oh, I’ve been wanting to read these! I’m waiting for the third one to come out!”

I said “Oh aglghlgh!” or words to that effect, bought them both immediately and had her sign them for me. :)

This encounter taught me something important, which was to never assume a fantasy story is a trilogy just because there’s more than one volume. Having now (or at least as soon as WAYFINDER is out) committed two duologies myself, I am quite sympathetic to the sudden outburst of THERE ARE ONLY TWO OF THEM!

So I was pretty pleased, more recently, to discover Alma on LJ, and I’ve been following her blog for a while now (she writes some truly beautiful essays), and today I am entirely delighted to present to you an interview with Alma in advance of the release of her new novel, MIDNIGHT IN SPANISH GARDENS.

With no further ado–Alma Alexander! 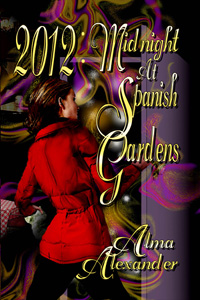 CEM: You’re the product of/have lived in many cultures: Yugoslavia, Africa, New Zealand, America–and those are just the ones I’m certain of. I know this is like asking a fish what it thinks of water, but do you think your international experiences helped guide you into writing fantasy in particular?

Alma: Inasmuch as I am a chalice that accepts being filled with new sights sounds and experiences as something that is both inevitable and something that I have grown to crave over the years after being exposed to so much of it when I was a child, yes, in a sense it did – because when you’re creating a world, as a writer, it is important that you create one which is self-contained, self-sufficient, and cohesive, no matter how fantastical or bizarre it might seem from the outside.

Worlds have rules, always, and it’s important to know what those are, even if you plan to break them later. But in order to break them convincingly or with any kind of necessary weight, you first have to know WHAT THEY ARE and WHY THEY ARE IMPORTANT. I learned early that the new worlds I might find myself in may look and feel and sound and taste awfully odd and weird to me – but that to those from within those worlds, they were the everyday, the quotidian. It taught me to accept the fact that magic may be and all too often is an indivisible part of our daily existence, if only one knows where to look for it, and how to accept it with both curiosity and grace when it is discovered.

Every one of us may have a certain place on this planet which is “home”, familiar and recognizable and instantly explainable to strangers because it is so firmly and deeply and instinctively a part of us and who we are and how we perceive ourselves. But what my world travels have given to me is an ability to put down roots in all sorts of strange places – perhaps not the deep tap roots that grow solid and strong and all the way down in the places where I first opened my eyes and learned to see, but even those shallow surface roots that I grew elsewhere have always allowed me to suck up the sustenance and moisture (in the shape of knowledge and understanding) which I needed in order to survive in the new place. Shallow roots do not mean weak plants – the great redwoods of California are reputed to have fairly shallow roots which spread very wide – and that’s enough to support a sequoia. I’ll take that.