Some of you may recall that a couple years ago I offered a Tuckerization in the Brenda Novak Annual Auction for the Cure of Diabetes (henceforth referred to as the Brenda Novak Diabetes Auction, although that’s really quite inaccurate). I didn’t do one last year, what with having a newborn and just being too wrung out to think at all. But this year I’m offering another Tuckerization, and this one’s better by far: you, yes, you could be a star in my next urban fantasy series!

Author CE Murphy is in the early stages of proposing new series ideas to her editors, which means you have a once-in-a-lifetime opportunity to become a major or recurring character in a brand-new urban fantasy world! This auction is for a Tuckerization (your name, or a name of your choice, as a character name) in an upcoming series, the details of which can’t be revealed because the world hasn’t been decided on yet–but it can pretty much be guaranteed as another mile-a-minute wild ride from CE Murphy.

Chances are you will not see the main character named after you, but it will absolutely be a major or recurring smaller role within the new series. Male or female, doesn’t matter, there’s room for all!

1. It’ll be some time before your character sees print, since we’re still in the discussion stages for selling the series! You’re probably looking at an 18 month to two-year wait…but what’s a few long months to literary immortality?

2. You may not be a good guy. (Frankly, the higher the bidding goes, the more likely you are to have input into whether you’re a hero or a villain and what you-the-character looks like.)

3. This auction may be given as a gift, but you should clear it with the person whose name you want to use first.

I got this cute little headbandy do-rag thing which rocks the pinup girl curls like a hurricane. Also, check out the visible line of muscles in my arm. *pats self on back* 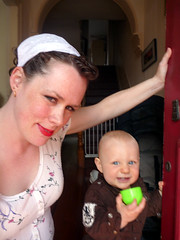 I have so many things to do I can’t even make a list. Feh. *goes to write*