I should’ve been at work by now, but I was talking with Mom and a fat mistle thrush came to sit in the tree outside our window for a while. :) 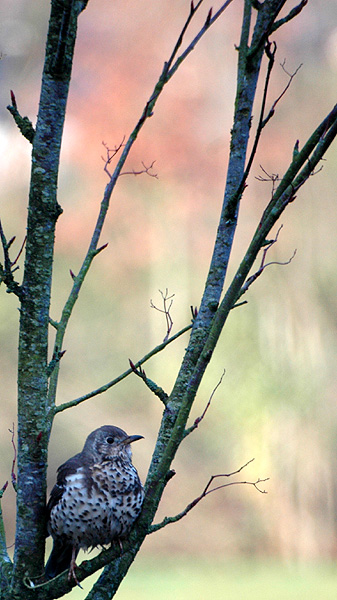 This pre-arranged taxi to bring us to the gym thing is simultaneously the best and worst idea I’ve implemented lately.

The alarm caught me deep in the midst of REM sleep this morning. There is *no way* I would have gotten up if there wasn’t a taxi already on its way. Ted apparently thought, “What the hell is that noise? Why are people talking?” when it went off, so it doesn’t seem likely he’d have gotten up either. But we both did, and I swam (marginally faster than yesterday and Monday) and Ted worked out. So yay us. And after tomorrow we get 3 days off, I said pathetically. :) Though on Friday we’re theoretically getting up at the same time to go into Dublin to go to Ikea first thing in the morning when it opens. Ted questions the necessity of this action (the first thing when it opens part). He may have a point.

As it gets closer to Christmas and my self-allotted one mad batch of candy making I have been wanting to just GO AHEAD AND MAKE AND EAT IT OM NOM NOM…but I realized today that we got back from America and basically went cold turkey on sweets 11 days ago, and it’s my observation that days 1-3 and 10-12 are the hardest for that, so that’s almost certainly part of the ZOMG WANT GOODIES I’m suffering. *snivel* But hopefully this awareness will make it easier to stay good, rather than saying “oh to hell with it, Christmas is next week anyway”. :)